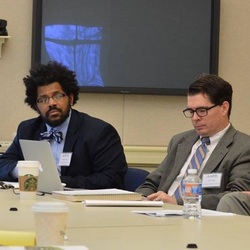 W.E.B. Du Bois panel at African American Intellectual History Society Conference
Edward Carson is the Dean of Multicultural Education at the Governor’s Academy. A historian of race and religion in America’s 20th century, he earned a B.A. and M.A. in History and Religion from Harding University. Carson attended Alabama Christian Academy in his hometown of Montgomery. He teaches seminars on African American Studies, Race, Class, Gender, and Black Christianity. His current research looks at race and ideology, particularly that of W.E.B. Du Bois. Carson is the co-author of Historical Thinking Skills and co-editor of Socialism and Democracy in the Life And Thought of W.E.B. Du Bois.  His working manuscript is entitled W.E.B. Du Bois’s Editorial Influence on Western Black Migration. He has published and presented papers that focus on Black identity, religion, Du Bois, and equity and Inclusion. He is a  leading organizer and activist in Greater Boston.

He has published and presented papers focusing on Black identity, diversity, equity, inclusion, religion, Du Bois, and the nature of history teaching. He is currently working on a book chapter entitled W.E.B. Du Bois: A Reluctant Communist. He edits for The Christian Century Magazine Then and Now and sits on the Christian Scholars’ Conference committee.  Read more about Carson's passion for teaching in an interview conducted by the American Historical Association. He has presented papers and workshops and sat on panels at leading diversity, equity, and inclusion conferences regarding race and inclusive policies in independent schools. Moreover, his exploration into the power dynamics of white male heterosexual institutions and how such promotes abject privilege at the expense of cultural changes is a focal point of his work.